In 2003, a Farmer Killed Himself to Protest Globalization. Little Has Changed

For years, farmers have said free trade policies have harmed them. Will the world finally start listening?

Sixteen years ago this week, Lee Kyung Hae, a South Korean farmer, scaled a fence in Cancún, Mexico, and stabbed himself to death with a penknife while wearing a sign that read “WTO kills farmers.” Lee was outside a ministerial meeting for the World Trade Organization, or WTO. Comprised of 164 member nations, the WTO sets the rules for 98 percent of global trade, and on that particular day in September 2003, thousands of farmers from all over the world had gathered to protest free trade policies they said robbed them of their livelihoods by privileging multinational businesses at their expense. “I am taking my life so that others can live,” read a note on Lee’s person at the time of his death.

Lee’s tragic story still resonates with farmers and activists around the globe, as evidenced by shrines in his honor that often appear at protests. “He is a very potent symbol of what they are fighting for,” said Timothy A. Wise, author of Eating Tomorrow: Agribusiness, Family Farmers, and the Battle for the Future of Food, who was at the Cancún protests. “Those were the relatively early days of globalization and the fight at the WTO was about whether developing countries were going to get a say in what the globalization process looked like.

Sixteen years after Lee’s self-immolation, political and economic upheaval throughout the globe has reinvigorated debates over who really benefits from free trade agreements. Farmers are still suffering much as they were in Lee’s time, and for the same reasons: free trade agreements continue to decimate local food markets, accelerate environmental degradation, displace entire communities, and strip farmers of their livelihoods.

In the U.S., the gospel of free trade has been a tenet of the “neoliberal consensus” that has guided foreign policy for the better part of three decades.The basic idea is that by removing barriers to exports and imports, consumers will have more access to a wide variety of goods and businesses that rely on imports or supply chains that stretch across borders will be able to reduce their costs. With some exceptions, the dogma of free trade has been faithfully adhered to by both Democrats and Republicans, and dutifully championed by policy wonks and media elites.

But in the wake of the 2008 financial crisis, and amid growing economic uncertainty worldwide, some are challenging the core assumptions about the benefits of globalization via free trade. The removal of trade barriers may have made consumer goods cheaper, but it also pitted manufacturing firms against foreign factories that paid much less for labor, leading to job losses for many American workers. Farmers around the world have faced a similar problem, as a sudden influx of cheap foreign-grown products from huge agribusiness firms have undercut local producers and forced them into desperate circumstances.

“There has been an acknowledgment—particularly after the financial crisis in 2008, which revealed the inner defective workings of globalization—that this economic program is faulty and it has to be revisited,” said John Feffer, director of the Foreign Policy in Focus project at the progressive Institute for Policy Studies. Feffer said a growing number of policymakers have acknowledged, in recent years, the need to “look under the hood and see what we can do about fixing it, or even getting an entirely different vehicle altogether.” 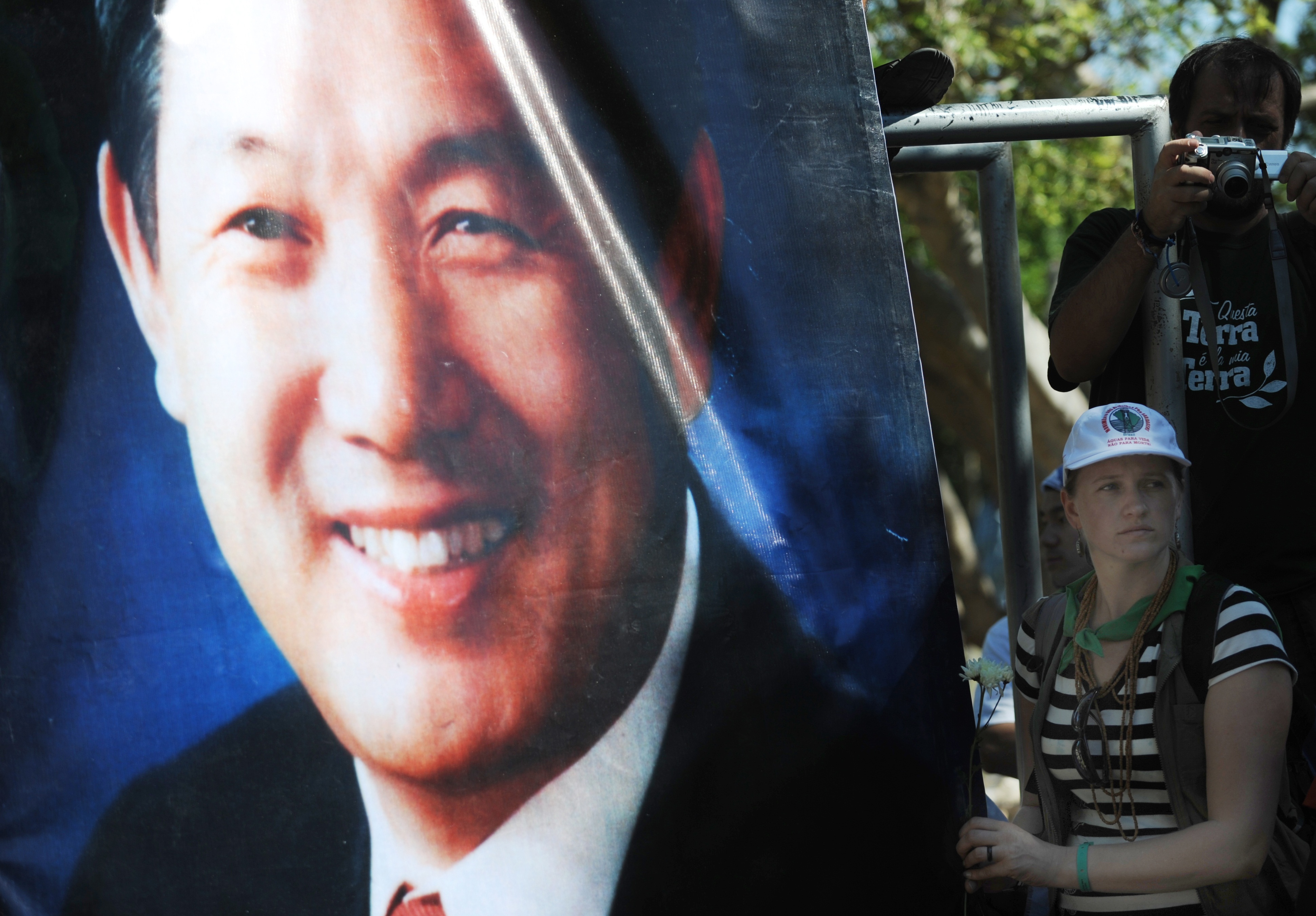 As a successful cattle farmer and the president of the Korean Federation of Small Farmers, Lee Kyung Hae witnessed the ways that free trade deals benefited multinational firms and agribusiness at the expense of farmers. Due to trade liberalization policies in the 1990s, manufacturers flooded South Korea with rice and meat sold at below the cost of production. This practice, known as “dumping,” devastated the country’s small farmers.

“Once I went to a house where a farmer abandoned his life by drinking a toxic chemical because of his uncontrollable debts. I could do nothing but listen to the howling of his wife. If you were me, how would you feel?” Lee wrote in a statement distributed at protests in Geneva in 2003 and later in Cancún.

Lee’s calls to “keep agriculture out of the WTO” became a rallying cry for groups like La Via Campesina, an international peasant movement of 182 farmer organizations in 81 countries. “La Via Campesina has long been warning the world of the risks of deregulation and unbridled expansion of global capital,” the group wrote in a recent newsletter commemorating Lee and calling for governments to embrace peasant-led alternatives to free trade agreements.

Lee advocated for keeping agriculture out of free trade agreements, in part, because it limits countries’ rights to define their own food policies. Many free trade agreements include rules that actually preclude developing countries from implementing food and agricultural policies that would help feed the poor by empowering peasant farmers. Since 1996, La Via Campesina has promoted the concept of “food sovereignty,” which asserts that countries should have the right to prioritize local agricultural production for local consumption, and implement protections against international prices if necessary to feed its own people.

India, for example, recently passed a national food security pact that, according to Wise, would guarantee basic rations for up to 800 million people by purchasing the food from Indian farmers and distributing to poor citizens. “That’s food sovereignty, and it is being challenged by the U.S. at the WTO for astonishingly hypocritical reasons,” said Wise, noting that the U.S. subsidizes many of its own farmers, and India’s food security program uses the same farm policies that the US employed to bring itself out of the Great Depression.

“The biggest misconception about trade agreements is that countries are winners and losers,” said Wise, whose book critically examines how industrial agriculture has hijacked food policies in the service of corporate interests. “But it’s not countries that are the winners and losers, it’s multinational firms that are winning, and by and large workers and farmers who are losing.”

One particularly poignant example Wise cites is of Mexican hog farmers who were put out of business after the North American Free Trade Agreement, (NAFTA). Many of these Mexican workers were actively recruited by Smithfield Foods, Inc., to work a North Carolina plant which is the largest slaughterhouse and meat-processing plant in the world. Part of the reason these workers were brought in, Wise explained, was to undercut unionization efforts by Black workers at the plant. “It’s the consummate example of how multinational firms win on both sides of the border,” he said.

Free trade adherents tend to spin these realities as the growing pains of a world becoming more prosperous as a whole, but farmers in the developing world tell a different story. “For the economic benefit of some large corporations… Korea’s agricultural base has completely collapsed,” said Jeongyeol Kim, a leader within the Korean Women Peasant Association in South Korea and a member of La Via Campesina. “Sixteen years later [since Lee’s death], the economic gap between urban and rural areas has widened significantly, and because of the neoliberal agricultural system, income gaps in rural areas are increasing and rural communities are collapsing.”

Carlos Marentes, who works with migrant farmworkers on the US-Mexico border and is also a member of La Via Campesina, sees the negative consequences for farmers on both sides of the border every day. “Poverty and landlessness among people who used to rely on sustainable farming is a huge factor in the displacement and destruction of rural communities,” Marentes said. The majority of the people he helps at the farmworker’s center he runs in El Paso, Texas, he said, are former peasants who could no longer provide for their families after NAFTA went into effect in 1994.

“They had no other option than to sell their piece of land,” Marentes said. He recalls one farmer who told him he sold his previously profitable land, in an act of desperation, for the paltry fee of $6,000, the exact amount it would cost to pay a coyote to smuggle him and his family in the U.S.

In the best cases, Mexican farmers have been able to find work picking fruits and vegetables for export to the U.S. But Wise said this type of “job creation” is hardly worth the cost. “You are trading farmers working their own land for a growth in the number of jobs for seasonal farmworkers going from strawberry fields to tomato feeds with the harvest. They have no stable employment and no guarantee of food.” This trade-off, Wise said, sparked a “rural crisis” that is widely cited as one of the drivers of displacement in Mexico.

Despite all of these setbacks, peasants and farmers have scored some victories in recent years. In 2018, for example, the United Nations passed the Declaration on the Rights of Peasants and Other People Working in Rural Areas, which began as a proposal put forwarded by La Via Campesina and its allies.

According to Tanya Kerssen, a food systems researcher and author of Grabbing Power: The New Struggles for Land, Food and Democracy in Northern Honduras, the declaration demonstrates the growing power of peasant organizing over the last 20 years. “It matters precisely because national governments have so often facilitated the theft and destruction of peasant and indigenous lands,” Kerssen said. “It sends a global message that, as those responsible for feeding most of the world’s population while safeguarding biodiversity, peasants are deserving of special protections… And it gives greater legitimacy and a policy framework to peasant movements advocating for the rights [of] small-scale producers and local food economies in their own countries.”

Due to disagreements between rich and developing countries, WTO discussions are now largely at a stalemate, with new rules barely even being negotiated. But trade liberalization continues apace, with multilateral free trade agreements proliferating throughout the globe, and it is hard to find an example of peasants benefiting from these agreements, despite claims by free market economists that free trade would be a force for reducing rural poverty. “Economists are famous for making assumptions about the world that leave them sounding like fools,” said Wise. “They are describing a world that does not exist.”

One key indicator of the changing narrative, Kerssen noted, is the U.S. political discourse. “Elizabeth Warren has been talking about her proposals for farm policy, which are along the lines of this kind of language that you haven’t heard in the U.S. since the New Deal era.”

Peasant movements have responded in kind, expanding their critiques and proposed solutions beyond just the scope of agricultural policy. “One of the big changes in the last 16 years is that Via Campesina and the broader food sovereignty movement has become much more intersectional and much more complex,” Kerssen said. “They are talking much more about a cultural shift and on transitioning whole economies, than just about one policy lever like keep agriculture out of the WTO.”