In the wake of this year’s global climate summit, advocates are raising the alarm about how industry continues to distort climate policy with public relations spin.

Indeed, one of the most critical challenges of our times is the need to confront corporate disinformation. While the stakes of Big Oil’s climate denialism and greenwashing are ever clearer — as wildfires tear through communities, entire nations are threatened by rising sea levels, and farmlands are ravaged by extreme weather — a more stealthy set of devastating impacts hides behind the lies fabricated by Big Pesticide corporations.

Like Big Oil, pesticide companies spend hundreds of millions every year on deceitful PR strategies to keep their hazardous products on the market, even as evidence mounts that many pesticides still used today are tied to certain cancers, damage to children’s developing brains, biodiversity collapse, and more.

In a new report, Merchants of Poison, we document a case study of just such pesticide industry disinformation, revealing a PR playbook similar in strategy, institutions — and at times the very same individual players — as that of the fossil fuel industry. As nearly all agricultural chemicals are derived from fossil fuels, this interconnection should come as no surprise. 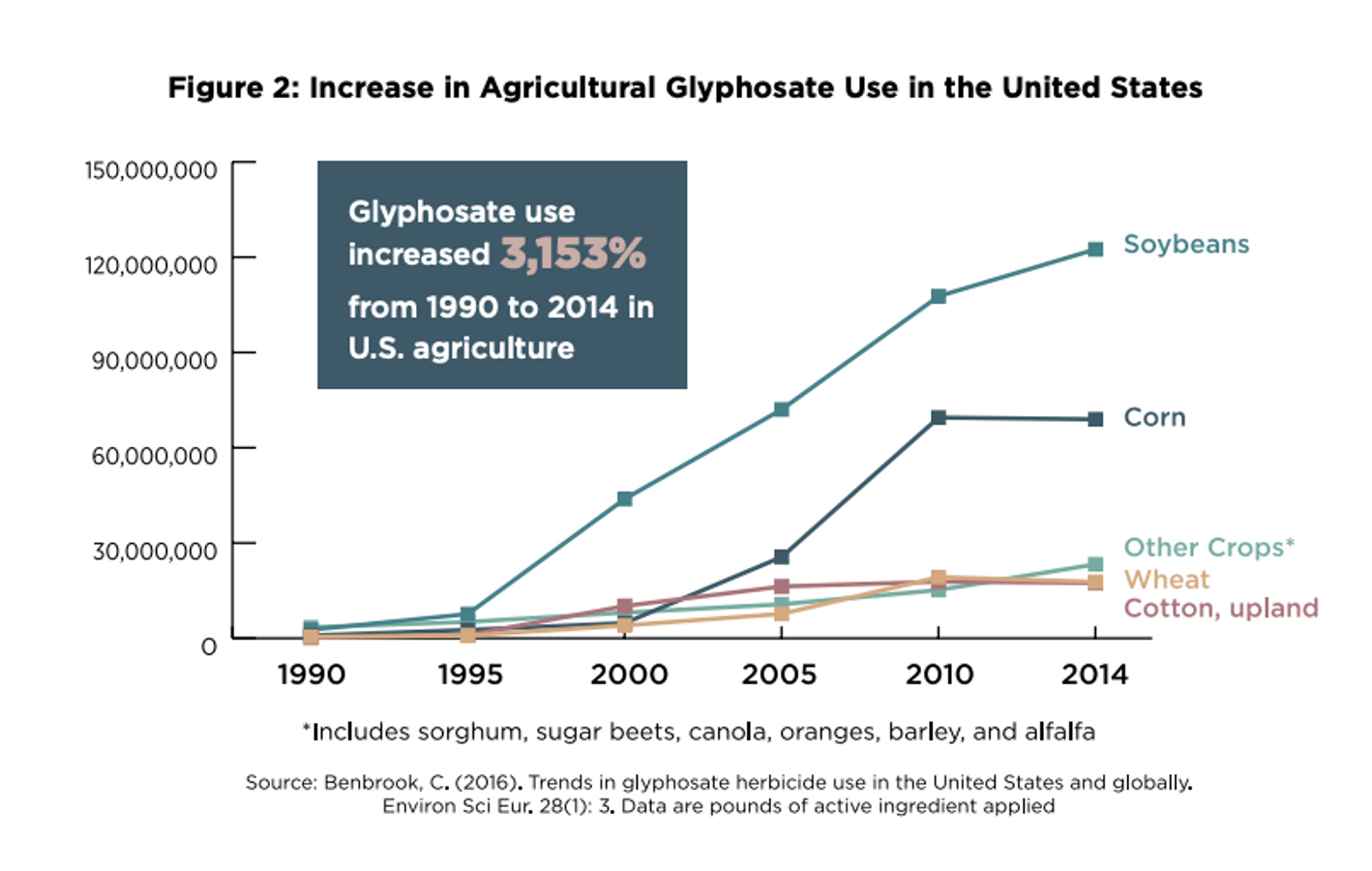 Today, more than 98 percent of genetically modified crops planted in the U.S. are glyphosate tolerant.

Merchants of Poison shows how pesticide giant Monsanto (purchased by Bayer in 2019) spent millions on deceptive communications strategies over decades to promote the narrative that its bestselling herbicide glyphosate, better known as Roundup, is safe – as safe as table salt, as Monsanto once claimed.

This messaging encouraged lax regulations that led to widespread use, especially as genetically modified corn and soy engineered to withstand being sprayed with the herbicide came to dominate farm acreage beginning in the mid-1990s.

Today, more than 98 percent of genetically modified crops planted in the U.S. are glyphosate tolerant, and glyphosate is the most widely used agrichemical in the world. In the U.S. alone, nearly 300 million pounds are used each year on farms, public parks, school grounds, and in home gardens. This despite the fact that, as far back as 1984, glyphosate was flagged as potentially causing cancer by U.S. Environmental Protection Agency scientists. And, in 2015, glyphosate was designated as a probable carcinogen by the WHO’s International Agency for Research on Cancer (IARC). Recent science has also linked the chemical to lower birth weights among babies, reproductive health impacts, and other serious health concerns.

Pesticide companies spend hundreds of millions every year on deceitful PR strategies to keep their hazardous products on the market.

So how did Monsanto thwart science-based regulation and mislead the public for over three decades? Thousands of pages of internal corporate documents brought to light through recent lawsuits over the cancer risk of Roundup reveal some answers. The documents show a PR machine in overdrive to manufacture doubt about the science linking glyphosate to cancer, and they reveal the many strategies Monsanto used to manipulate the scientific record over decades — from ghostwriting studies to running aggressive campaigns to discredit scientists who raised concerns about the pesticide.

The documents also expose how the company carefully cultivated a legion of front groups and other third-party allies that included top universities, scientific organizations, and professors who claimed to be independent even as they worked behind the scenes with Monsanto to protect sales of Roundup.

The documents also reinforce just how much the “disinformation industry” funded by pesticide companies has become a big business itself. Our analysis found that just seven of the front groups named in Monsanto’s internal strategy documents spent a total of $76 million over a five-year period, starting in 2015, pushing a broad range of anti-regulatory messaging. In addition, six industry trade groups named in the Monsanto documents spent more than $1.3 billion during that same time period, which includes defense efforts for agricultural chemicals including glyphosate.

Pesticides soar in the U.S.

While the report focuses on Roundup, the chemical is just one of dozens of pesticides that remain on the market thanks to industry’s efforts to deny and manufacture doubt about scientific evidence of harm. Indeed, 85 pesticides that are banned in other countries are still used in the United States. And during just one year, from 2017 to 2018, the EPA approved more than 100 new pesticide products containing ingredients considered to be highly hazardous. Industry disinformation has also enabled growing pesticide sales worldwide; global use has jumped over 80 percent since 1990.

The result? Billions of pounds of pesticides blanket the earth, contaminating wildlands and streams, decimating pollinator populations, and winding up in us, too. Today, more than 90 percent of us have detectable pesticides in our bodies. Many of these chemicals are understood to cause cancer, affect the body’s hormonal systems, disrupt fertility, cause developmental delays for children or Parkinson’s, depression, or Alzheimer’s as we age. And like all petrochemicals, we know another devastating cost: the consequences of pesticides on our climate.

The stakes of this disinformation are high. Right now, policymakers in the U.S. and Europe are deliberating about whether to enforce greater restrictions on glyphosate. And a landmark European Union proposal for more sustainable, climate-friendly food systems aims to cut pesticide use by half. But these public health measures are threatened by aggressive industry-led lobby campaigns using stealth tactics like those described in our report.

Just as a growing number of people are seeing the need to take on Big Oil’s disinformation to ensure real action on the climate crisis, we must lift the veil on Big Pesticide’s disinformation tactics and boldly confront the lies the industry spreads and end the indiscriminate poisoning of our planet and ourselves and ensure a healthy planet for all.

Stacy Malkan is the c-founder of US Right to Know. Kendra Klein, PhD, is deputy director of science at Friends of the Earth US. Anna Lappé is an author and founder of Real Food Media.